Dr Maran - Springfield Wellness Centre | Bariatric and Metabolic Surgery Centre in ChennaiBlogsAnemiaAnemia – Is Iron Deficiency the only cause? 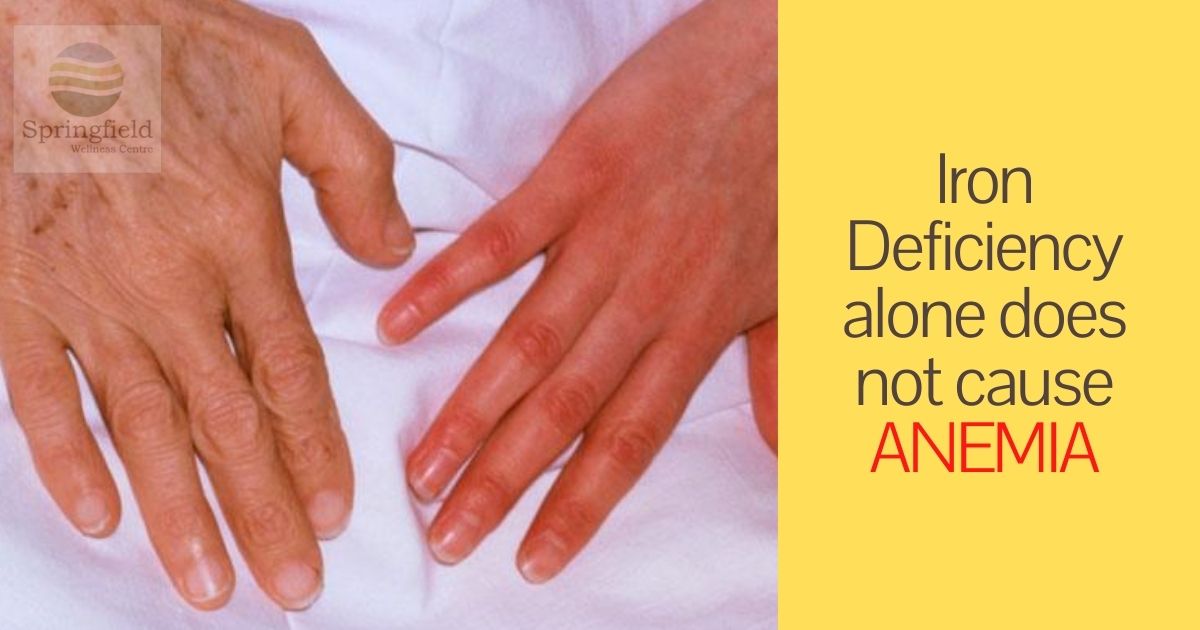 Anemia – Is Iron Deficiency the only cause?

When we say “anemia”, the first and foremost reason that comes to everyone’s mind is a deficiency of iron. Yes, deficiency of this important mineral in our body causes anemia and there is no doubt about it. But is that the only reason? Not true. Anemia is a condition and it can be caused due to several reasons. Let us get to know more about Anemia.

What is Anemia? Why is it a condition?

Anemia is a disease condition where there is a lack of enough red blood cells (RBC). These cells are vital in carrying oxygen to all parts of the body. So if there is a lack of enough RBC in the body then the oxygen-carrying capacity is severely impacted and this shortage causes the anemic condition. Anemic conditions include general fatigue and weakness, shortness of breath, and feeling dizzy, irregular heartbeats, etc. These symptoms are some of the general symptoms and many more symptoms occur based on the reason why the anemic condition has manifested in the body.

The popular cause of Anemia – Iron Deficiency

Our RBC or red blood cells have a compound in them called Hemoglobin. This compound helps in carrying the oxygen to various body organs from the lungs. This compound is basically an iron-rich protein. They are produced in the bone marrow which is a spongy material residing in the cavity of bigger bones of the body. So when the iron is in deficiency, hemoglobin along with RBCs are produced less and hence the anemic condition.

Other reasons for Anemia due to deficiencies of Vitamins and Minerals

The deficiency of vitamin B12 and folate can also cause anemia. When the nutrition in food does not contain these essential elements in adequate quantity, pernicious anemia can be the result. It is noteworthy to mention that some people’s body does not have the ability to absorb enough vitamin B12 through their nutrition might have it. Blame it on the genes. This condition can also cause vitamin deficiency anemia.

The deficiency of Vitamin B12 can cause red blood cells to enlarge unusually. These enlarged call structures of the RBC also lack the capacity to carry enough oxygen to the other body organs which can manifest into anemia.

Anemia Caused by Other Medical Conditions

Apart from anemia caused by a deficiency of certain minerals and vitamins, the condition can also be caused due to some medical conditions which are either acquired or hereditary. Here are few types of anemia

When the body does not produce enough RBC, aplastic anemia can occur. Conditions like exposure to some chemicals, some medications, infections, some autoimmune diseases caused by the body can all cause anemias.

Anemia due to inflammation

Some diseases manifested in the body can interfere with the production of RBC in the body. Hence when RBC is not produced in enough capacity, anemia can manifest. Such diseases include HIV/AIDS, certain types of cancers, kidney diseases, rheumatoid arthritis, etc.

Leukemia and myelofibrosis are certain conditions that affect the bone marrow. As a result, RBC production is affected which can cause anemia.

Our body destroys RBCs at regular intervals and replaces them with enough new RBCs in the normal course. But sometimes, the RBCs are destroyed faster than usual and are usually not replaced well within time. This mismatch can cause anemia. Such conditions can occur due to certain blood diseases that can be either acquired genetically or develop due to some other conditions acquired in later life. Sickle-cell anemia is a type of hemolytic anemia. In this condition, the hemoglobin forces the RBCs to assume the shape of a sickle (the knife-like instrument used in harvesting). When someone has sickle-cell anemia, their RBCs are destroyed faster than usual. This condition is genetic and interestingly it is found in high prevalence in some West African countries.

Why Iron Deficiency alone is perceived as being the cause of Anemia?

Blame it on the media. Generally, females who bleed heavily in times of menstruation and pregnancy can get iron and folate deficiency quite easily. Also due to general malnutrition and food that are consumed are poor in nutritional aspects are reasons for iron deficiency. This is common in India till today and healthcare departments in the Government began disseminating this information in a big way aimed at women and child welfare. This has lead most of us to believe that Iron deficiency is the only reason for anemia.

If you are diagnosed with anemia due to nutritional deficiency, apart from Iron substitutes, always take B12, folic acid, and proteins in enough quantity.